The mononymous Japanese percussionist Kuniko has made the first single-player recording of Steve Reich’s Drumming (1970—71), an extended piece that is the largest composition most directly connected to Reich’s time in Ghana in the late 1960s. The piece is usually performed by at least nine percussionists; there are also parts for several female voices, who appear in the second part. Kuniko’s recording is presumably made by overdubbing and is impressive both in the consistency required from musical performance as well as the studio production aspects. The recorded sound is extremely clear, and the technical execution of the piece is excellent.

As with most of Reich’s earlier works, the piece concerns itself almost exclusively with rhythmic phasing. The whole piece is based on a single rhythmic pattern, and it plays out across four sections that vary the percussion instruments used. I enjoy Reich’s music greatly as a listener, though it is only really with the pieces of the mid-1970s (such as the famous Music for 18 Musicians) that I begin get interested; it was at that point when Reich began to involve harmonic considerations (especially harmonic motion) in his work just as seriously as he had previous involved rhythmic considerations. In my opinion, his very best works have been selected pieces from the last decades (such as Double Sextet and You Are (Variations)) where a lifetime of his developing and refining the same musical style have paid off in excellent ways. In the past decades, he has often tended to write several pieces over a few years that explore the same conceptual ideas; usually one of those pieces of each type is the “best” one and is truly excellent.

The first recordings of Drumming were made by Reich’s own ensemble, and there have been a few others over the years (including So Percussion and ictus). Kuniko’s release was the second recording of Drumming to be released in 2018. The Colin Currie Group, led by one of Reich’s most active recent collaborators/champions, also released a version. Frankly, the differences between all of these recordings are not very extreme. Much of Reich’s work (and especially the pieces for purely percussion) leaves relatively little room for “interpretation” compared to other music, and having watched him once coach a rehearsal (as well as sit at the mixing board), he has a very particular idea of exactly how he wants the pieces played. I don’t really need more than one recording of this particular piece (to which I almost never listen, compared to my other Reich favorites). But if you’re a fan of this piece, you will probably want to have all the versions to find the subtle differences. © 2019 Fanfare 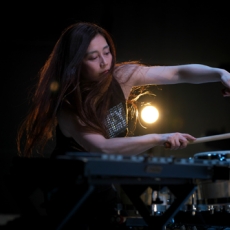