Alex Vizorek is a Belgian media personality who has written a new narration for Saint-Saëns’s Le Carnaval des Animaux, a work the composer did not envisage being narrated. The texts preceding each movement are in French, and for all their charm and erudite child-friendliness, they won’t hold much attraction for English-speaking listeners.

That said, the performance itself is excellent, not least due to the Duo Jatekok (pianists Adélaïde Panaget and Naïri Badal). They roar threateningly in ‘Marche royal du lion’ and hop about athletically in ‘Kangourous’, but have all the crystalline delicacy needed in ‘Aquarium’. Conductor Lucie Leguay favours a sharp, incisive approach, and gets a colourful response from the Lille players.

That carries over into a spiky account of the opening movement of Poulenc’s Concerto for Two Pianos, where the whirligig faster sections take on an almost manic quality. Panaget and Badal mesh together magically in the ethereal coda, where Poulenc imitates a Javanese gamelan. The unusual mix of Mozart and modernism in the Larghetto is seamlessly integrated, and the repeated piano notes launching the Allego molto finale ping out energisingly.

Panaget and Badal close the disc with a two-piano version of Saint-Saëns’s Danse macabre, preceded by Alex Vizorek reading the poem on which the orchestral piece is based. Etched with subtle detail, it’s a fine performance musically, but for French-speaking buyers Vizorek’s Carnaval narration will probably be the main point of interest. 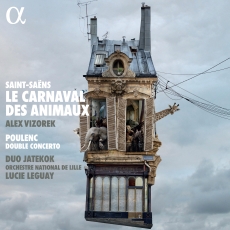 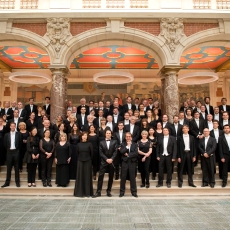