Various - A Grand Night for Singing - The Scotsman

In contrasting vein, A Grand Night for Singing, was all about the razzmatazz of American music theatre, with the entire focus on the heroic show-stopping partnership of Richard Rogers and Oscar Hammerstein II in a UK refit - by singer Kim Criswell with musical director Wayne Marshall - of Broadway director Walter Bobbie’s original “revue musical”, which premiered in New York in 1993.

A Grand Night For Singing let rip at every opportunity, taking us to lesser-known corners of the Rogers and Hammerstein output than much-loved favourites from Carousel, Oklahoma!, South Pacific, The Sound of Music or The King and I. New to me was Pipe Dream (based on two Steinbeck novels) with its melancholic pre-echoes of Lloyd Webber; and Cinderella, a treasure trove of golden Rogers melodies.

But there was freshness in every moment, generated by pianist/director Marshall and his smooth multi-textured sextet in economically refreshed scorings (a transformative jazzed-up Kansas City and a natty swing-style Honey Bun), and given visual excitement through Kim Criswell’s slick, never-a dull-moment concert staging.

Like every good Broadway cast, the magic lay in the personalities. Opera-trained Danielle de Niese proved a magnetic prima donna, gifted with key lyric moments that she hugged and caressed. Criswell, herself, cut a magisterial, matronly presence, in stark contrast to the full-on showgirl package that is actor-singer-dancer Anna-Jane Casey, whose all-action, high-kicking performance of It’s Me (from Me and Juliet) ended the only way it could, with her doing the splits. Stylish performances, too, from the adaptable Damian Humbley and cool Scots-born operatic baritone Richard Morrison.

It needed their collective energy and wit to turn what was effectively a potpourri of disparate numbers into a meaningful sequence, and what began as a slow-burner soon gathered the heat and charisma necessary to transport us on a captivating journey of reminiscence and discovery. 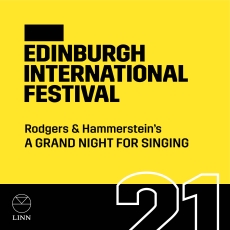