As a singer, Barbara Hannigan has established a formidable reputation as a performer of music from the last century and this present one, attracting particular acclaim for her evangelism on behalf of new music, a good deal of which has been specially written for her. I’ve been spellbound by her recorded and live performances of Hans Abrahamsen’s let me tell you. I also admired her recording of songs by Eric Satie. In recent years, she has developed not so much a parallel as a complementary career as a conductor. This album draws both strands of that career together.

This is, in the best sense of the term, a concept album, as we learn from the booklet notes which are authored by Barbara Hannigan herself. Everything revolves around the character of Lulu. Hannigan reminds us of the passage towards the end of Berg’s opera when Lulu recalls a key point in her past life: the time she spent in hospital at the age of 15: “at this time she found her voice, her words and her place in the world.” She goes on to explain that it was through her understanding of the 15-year-old Lulu that she found her way into Berio’s Sequenza III. And the age of 15 links through to Gershwin too because this “has something of the 15 year old Barbara in it, with my memories of being onstage singing Girl Crazy in a school production many moons ago.” Of course, there’s a further connection in the fact that Berg and Gershwin admired each other and met in 1928. Furthermore, Girl Crazy and Lulu are almost contemporaneous scores. So, prompted by these links Hannigan has developed the Crazy Girl Crazy programme as “a hall of mirrors” in which the Berio and Gershwin pieces serve as “reflections of Lulu from varying angles and stages of her life. Her blood runs through the veins of all three works presented here.”

Hannigan opens proceedings with Sequenza III. I’ll be candid and say I’m ill-equipped to judge this. I find the piece completely incomprehensible. Like an abstract painting, it does nothing for me and I simply don’t understand what is going on. However, I can appreciate that Hannigan gives an astonishing account of it. It’s truly remarkable that a human voice can do so much and can produce such an amazing variety of sounds. I simply don’t know how she does it; it’s a formidable achievement. Incidentally, she has transposed the piece higher – with permission - than the pitch at which Berio wrote the piece for Cathy Berberian. I bet that Hannigan would have been able to deliver this piece at pretty much any pitch but the higher pitch fits with the concept of the 15-year-old Lulu.

Barbara Hannigan is a renowned exponent of the title role in Berg’s opera so it’s most interesting to hear her interpretation of the Lulu Suite. I wonder to what extent in this performance we hear Berg’s music from the standpoint of a Lulu rather than “just” from the standpoint of a conductor. I wish that in the bonus DVD – of which more later – we had seen something of Hannigan at work on the Berg piece for it seems clear that she has the conducting technique to lead a strongly characterised performance. We’re accustomed to hearing this music played by a full-sized symphony orchestra. The Ludwig Orchestra has a slightly smaller string section (20 violins, 8 violas, 6 cellos, 3 double basses). They never sound overwhelmed in this recording – the microphones may well help – but the size of the string choir may be one factor behind the very clear textures that Hannigan often secures. That said, her vast experience in contemporary music must mean that she has a really acute ear so that will be a factor also. Her performance of the ‘Rondo’ has a great many beautiful features but she also ensures that the darkness in the music is properly expressed. I found this a compelling performance. She secures great precision in the nightmarish fast music of the ‘Ostinato’.

Hannigan sings as well as conducts ‘Lied der Lulu’. I must confess that I wondered if her voice had been dubbed onto her conducting of the orchestral score. However, she and the orchestra performed the Suite live in concerts prior to this recording and I see that they are to give further performances in the closing weeks of 2017. I can only presume, therefore, that somehow she achieves the tremendous feat of directing and singing this highly demanding piece of music. Her formidable vocal technique and range are well in evidence. The concluding ‘Adagio’ is very intense and the yearning sadness of the music comes out as well. The great orchestral scream (7:05) hits you like a piledriver. Miss Hannigan sings the concluding vocal phrases in this movement.

I’m inclined to describe the Girl Crazy Suite as Gershwin, but not as we know it. Three songs from the 1930 show have been selected – ‘But not for me’, ‘Embraceable you’ and ‘I got rhythm’ – and Hannigan and Bill Elliott have woven them into a continuous suite. They deliberately designed the Suite to be complementary to the Lulu Suite, not least, Hannigan says, in that the songs were ordered in such a way as to be “a dramaturgical mirror of the Lulu Suite.” They determined that the orchestration should not be ‘authentic’ but instead, should require the same forces as Berg’s suite. Furthermore, some musical material from Lulu is incorporated and the Suite also pays homage to a number of composers that are particularly special to Hannigan, such as Ligeti and Mahler. The results are, therefore, a world away from Broadway Gershwin as heard, for example, on John Mauceri’s recording of the original score of the show (Elektra Nonesuch 7559-79250-2) but they are intriguing.

There’s a subdued, Bergian opening from which fragments of ‘I got rhythm’ emerge before Miss Hannigan sings ‘But not for me’. This is given a slow, emotive treatment and the tremolando strings at the start of the last stanza are definitely un-Gershwin – but effective in this context. There’s an orchestral passage into which is woven, if I’m not mistaken, a sprightly tune from another Gershwin show, Strike up the band. Then Hannigan treats us to ‘Embraceable you’. Incidentally, the chorus near the end of this number is sung by some members of the Ludwig Orchestra; they do a pretty good job. I’m not sure I’m completely convinced by the very slow start to ‘I got rhythm’; the effect seems overdone. However, once the tempo picks up it’s all great fun and towards the end Miss Hannigan’s vocals go right up into the stratosphere. This is guaranteed to bring the house down. The Suite is a fascinating and fresh take on Gershwin and it’s clear that Hannigan has great affection and enthusiasm for Gershwin’s music. 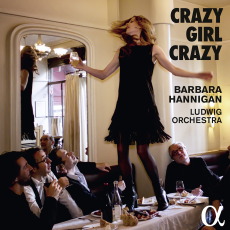