This is a remarkably enjoyable recording of Schubert’s great Piano Trio No. 2 in E♭, but it might take a dose of persuasion to convince collectors to acquire it. There are chamber music masterpieces that are collected in multiples, like the five complete sets of Beethoven’s string quartets I own—real devotees might own more than a dozen—while other masterpieces somehow resist multiple versions. For years I had only one recording of Dvořák’s “Dumky” Piano Trio and only two of his Piano Quintet (technically No. 2 if you count the early, formative No. 1). On my shelves there’s a sprinkling of the Mendelssohn Octet and even fewer of the string quartets by Borodin and Smetana. In that vein, I was satisfied with a CD containing both of Schubert’s piano trios, by Istomin-Stern-Rose.

Others might be in the same position, not from shortchanging these beautiful works but as a tribute to their instant accessibility; a great deal in both of Schubert’s piano trios relies on his melodic gift rather than anything approaching Beethoven or Brahms’s genius for development. The melodies are repeated very often with minor changes, and Schubert’s development and variations are easy to follow by ear without undue complication. He is, in many instances, an easy-listen genius.

There’s also the factor that the Busch Trio offers only Piano Trio No. 2; the early movement for piano trio D 28 is in the same key, B♭, as the familiar Piano Trio No. 1 and shouldn’t be mistaken for it. With all repeats, Trio No. 2 from the Busch Trio takes 45 minutes instead of closer to 35 minutes when both trios occupy a single CD. In this new reading one immediately notices the boldness with which the Busch attacks the first movement. The ensemble gained considerable acclaim in their series of Dvořák’s chamber works for strings and piano. Those readings exhibited the same vibrancy and exuberance heard here, although it’s not very often that Schubert is approached with the same vigor as middle-period Beethoven.

After a moment of adjustment, I began to relish the Busch’s bright, bold approach, which extends to all four movements. Captured in excellent close-up sound, the confident musicianship of the three members—Omri Epstein, piano; Mathieu van Bellen, violin; and Ori Epstein, cello—is quite telling. Each has a distinctive voice, and although the piano is usually the leading and dominant instrument, the other two rise to solo caliber. All three performers went to music schools in the UK before founding the trio in 2012. It is London-based and took its name from the great violinist Adolf Busch. There’s also the special connection that van Bellen plays the “ex-Adolf Busch” Guadagnini violin from 1783.

Trio No. 2 is played so vibrantly that there’s not much to add in detail. Tempos are generally at the faster end of the scale, and dramatic contrasts are heightened. The slow movement has a melody that Stanley Kubrick tried to popularize in Barry Lyndon, but the movie never got very far. This takes nothing away from the ravishing main theme, which receives an abundance of sensitivity and tenderness in the Busch’s rendition without becoming cloying. The Scherzando displays the perfect balance between vigor and merriment. The sparkling finale particularly benefits from pianist Epstein’s light, dancing rhythmic sense.

Schubert left behind a large number of sonata fragments and single movements, and they can turn out to be isolated gems, or else charming trifles. Of the two on this program, the late Notturno, D 887, is fairly well known, and at 11 minutes it might have been intended as the Adagio movement of Piano Trio No. 1. Its quality of sublime stasis gives the music close affinity to the slow movement of the Piano Quintet in C. The Busch Trio give it a strong performance that rises to eloquent nobility.

I don’t remember ever hearing the seven-minute “Sonatensatz,” D 28, which is described in the program notes as a confident sonata-allegro in B♭ from a 15-year-old Schubert. To me it sounds like a precociously talented exercise in the style of Haydn. But that’s not insignificant, and nothing about the piece is timid.

The Busch Trio developed a fund of good will through their Dvořák series, and I imagine they will record the Schubert Piano Trio No. 1, probably in short order. Meanwhile, the major works here are given absolutely inspiring performances. Strongly recommended. 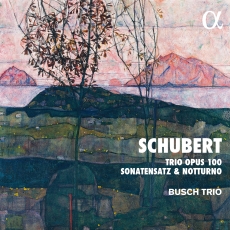 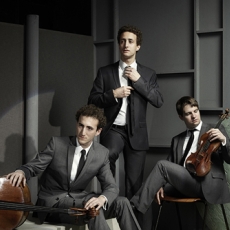 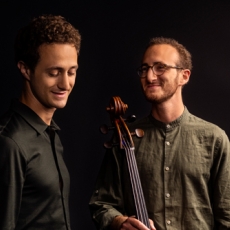