A Tavener tribute of substance and compelling emotion.

Cappella Nova has a long association with the music of the late John Tavener (2013), and so this tribute album is bookended with music from the very first composition they commissioned from him, Resurrection. Conductor Alan Tavener is a relation, but not close, though he seems to have an innate understanding of this music that only a close relative could! Cappella sings everything here with endearment and understanding.

In fact this is as fine a compilation of Tavener's music as I have heard, and there are many. He was an uneven composer; at his best, as in many of the smaller choral works, The Protecting Veil, and in my opinion his finest piece, The Veil of the Temple, his music approached the sublime. At the other end it often felt as if he were on autopilot, or at best unsure of his direction. Spiritually towards the end of his life this same dilemma plagued him, though he professed to remain an Orthodox Christian.

His influence however, is not in doubt. Just listening to the close harmonies, brilliant voicings and ethereal tonal structures, one cannot doubt that so many currently composers like Eric Whitacre and others would never have been without Tavener. There are some gorgeous sounds and excellent performances here, and this well-filled disc is unlikely to disappoint anyone. A moving and very apt tribute disc to a complex and meaningful composer. As an addition, there is a piece by one of Tavener's best students, Ivan Moody. The influences should be obvious, but as in Moody's other music, he is definitely his own man. 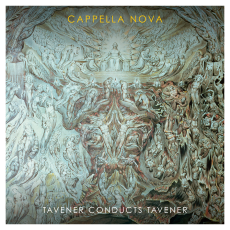