The music closely associated with Christmas in England is the carol. New Grove defines the genre thus: "During the Middle Ages, an English or Latin song of uniform stanzas beginning with a refrain called a 'burden' that is repeated after each stanza. Medieval carols could be on any subject, but were mostly about the Virgin or the Saints of Christmas. In recent centuries the word has usually referred to strophic songs (some with refrains) associated with Christmas, many of them with texts derived from medieval English carols." Many composers through the centuries have written carols, either arrangements of old melodies, or new melodies on traditional texts. Almost all of them are associated with Christmas, which bears witness to the statement in the last line of New Grove's definition. This is also the starting point of the recording by the Gothic Voices. "[This] programme conceptually transfers the modern carol evening, with its ample attention to the past, to the mid-fifteenth century, combining the 'new music' of the time with compositions that originated up to 300 years earlier."

It is acknowledged that in old times it was mostly recent music that was performed. The tradition to perform 'early music' basically roots in the 19th century, which - partly due to nationalism - became interested in the past of a people or a country. "Nevertheless, it is highly plausible that music written for special occasions, or music which became particularly popular at the time of writing would have remained in use for generations, a phenomenon certainly observable in later periods (...)". Obviously, we will never know for sure what was sung in the 15th century. Considering that especially the more 'popular' music, such as the carol repertoire, was subject to change, as it was not fixed and handed over from one generation to the next orally, the carols in the programme are performed in the fixed form from a particular point in time. The programme also does not only include carols, but also motets and other written-out pieces by composers who are still known by name. From that angle, this programme includes probably more variety than was the case in carol evenings in the 15th century.

All those historical considerations apart, this is a highly interesting collection of pieces, some of which are quite well known - such as the carol Ther is no rose - whereas others are much more obscure. The programme is divided into two large sections: Advent and Christmas. The first chapter opens with an anonymous hymn from the 15th century in Latin, Veni, O sapientia: "Come, O Wisdom". It has four stanzas, each of which is followed by the refrain "Gaude! Gaude! Emmanuel nascetur pro te Israel!" - "Rejoice, rejoice, Emmanuel will be born for you Israel". Another anonymous piece from the 15th century is Alma redemptoris mater: As I lay, one of many pieces of that time whose text is a mixture of Latin and the vernacular. Dunstaple's Gaude virgo salutata is a typical example of a sophisticated piece, in this case an isorhytmic motet, which is almost at the other side of the spectrum. It is for four voices, all of which sing a different text simultaneously: triplum, duplum, contratenor, tenor. The latter has the cantus firmus (Hail O jewel, brightness of the sky. Hail sanctuary of the Holy Spirit). Nowell, nowell, nowell is a carol; its five stanzas alternate with the refrain: "Nowell, nowell, nowell, this is the salutation of the angel Gabriel". The angel is one of the characters figuring in the Advent section (Alleluia, alleluia, alleluia), alongside Joseph (Mervele not, Joseph), and - obviously - Mary: Edi be thu, heven queene (Blessed be you, queen of heaven) and Ave regina coelorum.

The Christmas chapter opens with a 14th-century carol, Lullay, lullay: Als I lay. It is a kind of dialogue between mother and child, with the character of a lullaby. Mary is again one of the central characters, such as in Ther is no rose of swych virtue: "There is no rose of such virtue as is the rose that bore Jesus. The Gloria by Queldryk, a composer from around 1400, about whom we know very little for sure, is a so-called troped version: the original text of the Gloria has been extended with new lyrics. In this section we also hear pieces which are little more than expressions of joy about the events at Christmas night, such as Nowell: Now man is bryghter (Now man is brighter than the sun), in which each stanza is followed by the simple refrain: "Nowell, nowell, nowell".

This programme includes pieces which differ in character and musical texture. Some are relatively simple and straightforward, others are much more complicated, and require very skilled singers. Some are rather introverted, others are quite exuberant. It makes this disc all the more compelling, and that is also thanks to the outstanding performances of the four members of Gothic Voices. An interesting question is whether during carol singing in the 15th century no instruments were used (such as the harp). Probably not, but the booklet does not include anything about performance practice. What is notable is that the singers make use of historical pronunciation. This helps to feel really transported to a different era.

This is definitely one of the most interesting and imaginative Christmas discs that I have heard in recent years. 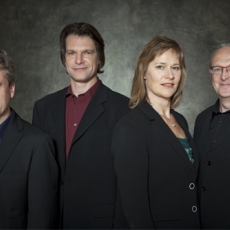