Erlebach belongs to that generation of talented German composers whose music is only beginning to emerge from the shadow of Bach and Telemann. A great deal of his music (2500+ of his own and others’ works at his death) has not survived, much of it having been destroyed by a fire in the library at Rudolstadt, Thuringia, where the composer had been Kapellmeister. Even what survives has mostly been recorded as parts of collections, of baroque Christmas music and the like.

There is slightly more of Erlebach’s music in the catalogue than I had thought, but only a handful of recordings are devoted entirely to his music, and three of them are from the Outhere group of labels: in addition to this new release, there’s a 2018 Ricercar recording of his complete Trio Sonatas (RIC393 – review), and the latest batch of the mid-price Alpha Collection, due for reissue in June 2021, contains another recording of his Lieder entitled Zeichen im Himmel (ALPHA612).

The Trio Sonatas are probably the best place to start with Erlebach’s music, and the performances by L’Achéron on the Ricercar recording are a good way to appreciate them. I didn’t review them at the time, because Outhere were still sending press previews in mp3 only, and I was hoping to obtain better quality. Listening to them again, I have to admit that the full-fat mp3 (320 kb/s) give a pretty good idea of the quality of the CD, and the album is very enjoyable.

Though the works on the new recording – and on Zeichen im Himmel – are described as Lieder, so secular rather than sacred, there is nothing frivolous about them: all are full of good Lutheran religious and moral sentiments, with internal rhymes in each line to emphasise the point, but the approachability of the music and the attractive performances make the sentiments palatable. The sentiments and the ‘political’ comments (i.e references to current events) may not chime with modern listeners, and rhe poetry may often be of the William McGonagall variety, but the music – ‘sensitive and imaginative’, as the notes in the booklet put it – and performance will appeal.

I would have had some reservations about recommending 71 minutes of counter-tenor singing, but the instrumental accompaniments are well varied, up to five parts, and the programme is broken up with two instrumental sonatas from a few years earlier than the Lieder. Overlapping to some extent with the new Alpha recording, in addition to the Ricercar, there’s a Linn album of his Six Sonatas for violin (or violone) and viola da gamba (CKD270 – review). Johan van Veen had some reservations about that Linn recording, but thought it worth having as the best to date. Zeichen im Himmel also contains three of the trio sonatas, Nos. 2, 3 and 4. It's just a shame that the available Erlebach recordings should overlap to an extent.

I haven’t made detailed comparisons with those other recordings, though I have listened to and enjoyed them again; I shall be reviewing Zeichen im Himmel in a forthcoming article on the June 2021 Alpha reissues. The performances from Le Banquet Céleste are all at least as enjoyable as the other Erlebach abums, and their director, Damien Guillon makes an attractive case for both the vocal and the instrumental works.

This recording will appeal especially to those wishing to expand their knowledge of the music of German composers of this period, but it should also prove attractive to general listeners. 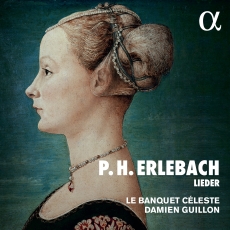 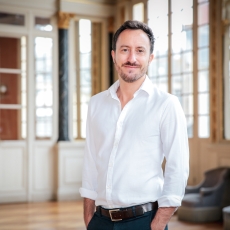 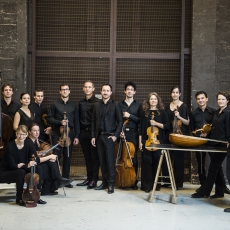