Six instruments - two violins, viola, double bass and two horns - for the Divertimento .  No Cello?  Perhaps the work was for an occasion when the nobility also stood; and so musicians, considered lowly, couldn't sit.  The Vienna Octet, however added the instrument to the first recordings of the work in 1950 but shortened the finale by 94 bars, a solecism righted in their remake 11 years later, cello nevertheless retained.

Neither version bothers with the preceding March, K445, which the Scottish Chamber Orchestra Ensemble includes. They also stick to the text; and it's easy to hear how Mozart used the double bass to fill gaps in the lower parts.  It's also easy to hear through the splendour of an SACD recording , finely balanced for reverberation and clarity, a skilled, discerning musicianship that reveals K334 to be much more than a price of diverting entertainment.  Punches aren't pulled in the switch from a ductile D major first movement to a subfuse  minor second, particularly in the third variation where dark-toned natural horns further dim the atmosphere.  These musicians inflect the extremes as they do the nooks and crannies in between.

Numbers drop for the Oboe Quartet but standards remain at their highest.  Robin Williams add his own voice, his tone plangent yet faceted, his phrasing shaped to reflect the feeling he puts into his playing.  The slow movement, also in D minor, is most emotive. You're unlikely to regret buying this exquisite disc. 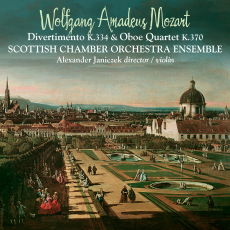