This release comes with a making-of story. A recent addition to the faculty of the London Royal Academy of Music, Oliver Knussen and RAM principal Jonathan Freeman-Attwood were discussing new concert and recording projects for the student ensembles. In time, Stravinsky was proposed, and a new recording of The Soldier’s Tale hit upon. Following a trend in the U.S. of which I was not aware, they agreed to cast composers in the character roles. This was to be RAM stalwarts Harrison Birtwistle as the soldier and Peter Maxwell Davies as the devil, but fate intervened in the form of Maxwell Davies’s final illness and death. Eventually, another composer friend of the RAM, George Benjamin, stepped in to take his role. Harriet Walter—a witty and moving Harriet Vane in a fine BBC Lord Peter Wimsey series—was the happy choice for the important narrator.

The Soldier’s Tale runs nearly 60 minutes—an acceptably full CD—but Knussen, always a creative programmer, wanted a setting for his primary jewel. He found it in eight tiny gems by Stravinsky and the two original composer/readers. Less than 13 minutes in aggregate, all but the first are memorial works—by or for Stravinsky—or works written to honor him on his 85th birthday. The exception, Stravinsky’s 1964 Fanfare for a New Theater, is a virtuoso duo-trumpet work of but 40 second’s length. It sets the program’s tone in a brilliant demonstration of the composer’s late serial technique. Each of the others are similarly concise and dazzling, each in its composer’s characteristic style, though none, it must be said, outshines the older master. All eight, like The Soldier’s Tale, employ a chamber ensemble. Maxwell Davies’s choral Canon ad honorem Igor Stravinsky required the ministration of Knussen’s own celebrated compositional skills to reset it for wind quintet—substituting alto flute and English horn—plus trombone and harp. It sounds to the manner born.

But the gem in the center is what will attract the buyer; what of The Soldier’s Tale? Though there have been a number of estimable recordings over the years, I have an unshakable affection for Stokowski’s unfussy and theatrical 1967 recording on Vanguard, with three fine French readers. It was the first I heard, and it was the inspiration for my own production of the work as my senior project in college. About 10 years ago, it was joined by the exceptional recording conducted by Stravinsky (Sony) assembled from his 1961 recording of the suite, plus long-forgotten tapes of the remaining interludes he made in 1967. Jeremy Irons reads with uncommon skill in a new English adaptation of Charles-Ferdinand Ramuz’s original French text by British theater personality Jeremy Sams. Colleagues Andrew Quint and Steven Ritter each declared the recording definitive (Fanfare 31:2), and I am not inclined to disagree. It is no small praise, then, to say that this new release joins this exalted company in my pantheon. Knussen is as steeped in the music of the Russo-American master as anyone now conducting. As a composer, he sees the music from the inside, and he has an infallible dramatic sense. The venerable English text by Michael Flanders and Kitty Black is used, though one might have wished for the superior Sams, but Walters is as fine as Irons in her part, and Benjamin reads the hard-to-scan lines of the devil with real thespian skill. Alas, Birtwistle is a soldier of flat affect, if engaging accent. It is a small part, and his reading is amusing for its unlikely existence, but dramatically it is the recording’s one weakness. There is certainly nothing wanting in the student performances, which are as fine as those of antecedent professionals, and they and their conductor achieve technical perfection without making the mistake of polishing the rustic edges off. This is, after all, a folk tale about a soldier-violinist.

The presentation is first-rate as well, with Linn’s trademark impeccable recording and outstanding notes on the music and performers. The full account of the planning process is wittily told in Freeman-Attwood’s preface to these. Oh, and thank you, whoever did the disc mastering, for putting enough time between works to clear the palate, as it were. That is the final plus to an unequivocal recommendation. 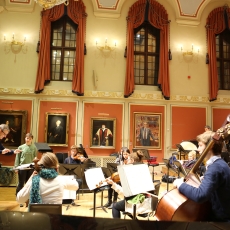 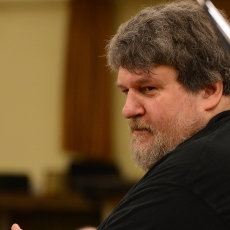