Because Ludwig van Beethoven's 16 String Quartets are regarded as his most profound chamber music and revered as a highpoint of Western classical music, his other chamber works have suffered somewhat by comparison, though not without reason. The String Quintet in C major, Op. 29, stands by itself as Beethoven's only completed work intended specifically for the configuration of two violins, two violas, and cello. Beethoven wrote little else for the ensemble, not counting the String Quintet in C minor, Op. 104 (an arrangement of the Piano Trio in C minor, Op. 1, No. 3), and the Fugue in D major, Op. 137 (a short study that is generally seen as a minor effort). (The string quintet transcription of the Octet in E flat major and a fragmentary Quintettsatz in D minor suggest that this format may have been uncongenial to Beethoven, unlike the quartets which preoccupied him throughout his career.) Yet because 2020 marks the 250th anniversary of Beethoven's birth, virtually everything he wrote is likely to appear in some form on recordings, though even a mixed bag of odds and ends can make for interesting programming. The WDR Symphony Orchestra Cologne Chamber Players offer a solid performance of Op. 29, so the most satisfying work is presented with polish and is quite compelling in this strong reading, where Beethoven's skillful handling of strings proves his early mastery. As a transcription of a piano trio, Op. 104 is not as bold and freely exploratory, yet its Classical elegance and pleasantness account for its continuing place in the repertoire. However, the dense 5-part Fugue in D major, not to be confused with the magnificent Grosse Fuge for string quartet, Op. 133, is less enjoyable, largely because its constant stream of notes is largely unrelieved by rests, and its resemblance to a counterpoint exercise is less than edifying, no matter how vigorously the WDR musicians render it 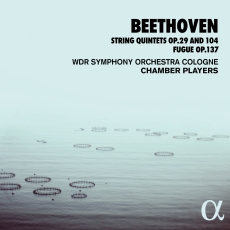 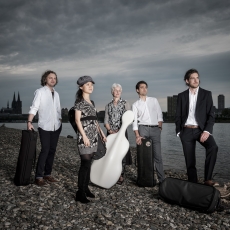